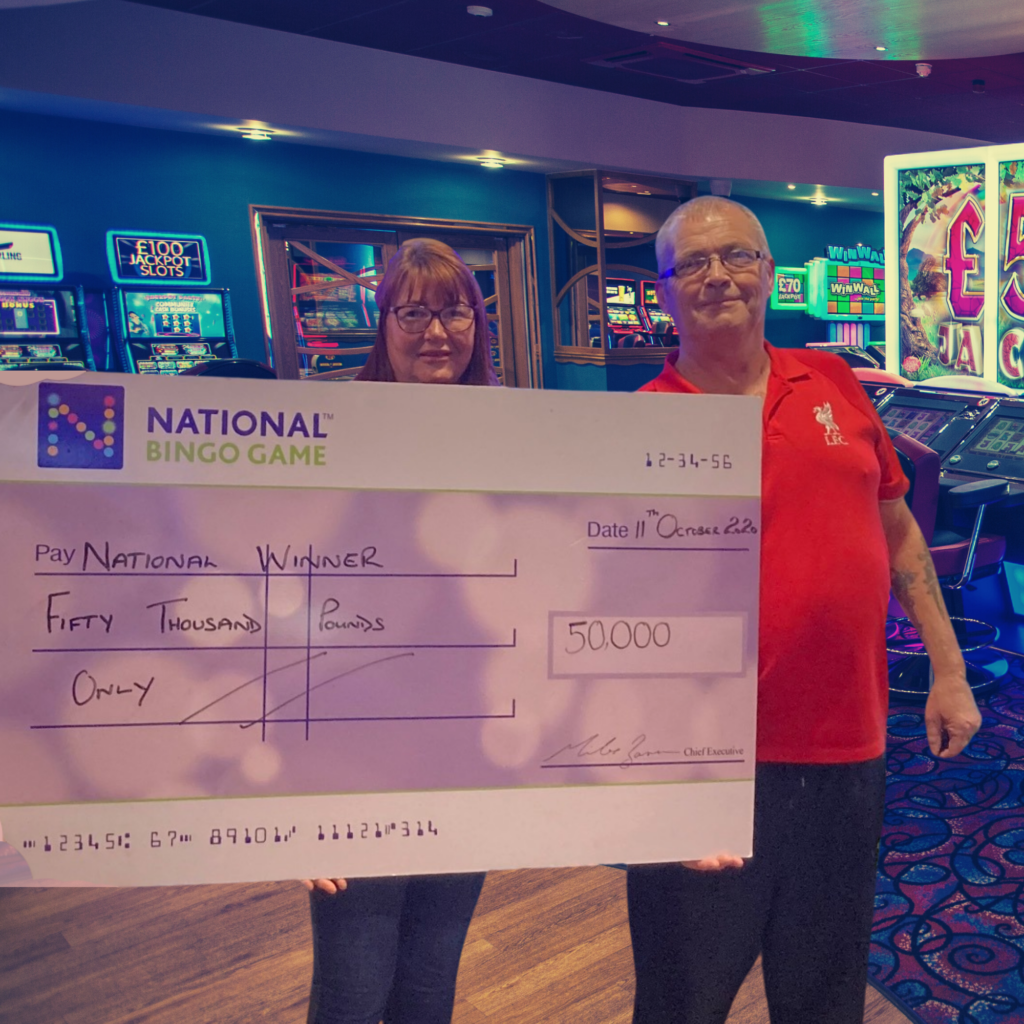 One lucky Leigh bingo player at BJ’s Bingo Leigh received an unexpected boost to his Sunday night at bingo, when it became super sized, thanks to winning a life changing £50,000 on the National Bingo Game.

David Biggs, 64, is a regular at BJ’s Bingo Leigh and was first introduced to the game by his mother Patricia back in 2012. Since then he has been a regular at the club, attending twice a week with his wife Beverly, usually on a Saturday and Sunday.

On Sunday 11th October David and Beverly arrived at the club for their regular Sunday evening session, little did they know that they were in for big surprize! David was playing the National Bingo Game on his own, as Beverly was finishing of another game elsewhere in the club, he said:

“The numbers just came out one after another! When I called BINGO on the sixteenth number, I knew I’d hit the big money. I got up from my seat and did a little dance I was that chuffed! Beverly had no idea, as she was not in the main area: when she came to find me and I told her the news she didn’t believe me at first and thought I was joking.  When she realised, I was telling the truth we both looked at each other and were in absolute shock.  Our big win just hasn’t sunk in.”

“We’ve got a few bits we can pay off, but as for the rest, we’ll just watch it grow into a nice little nest egg. We’re still in shock but it will be spent wisely. We love coming to bingo: we’ve made so many friends and it’s a fun night out with terrific value food and drinks: bingo brings people together whether it be family of friends.”

“David and Beverley are well known and extremely popular customers within the club. It’s great to see such a life changing amount being won by such lovely people. I was driving back from Bournemouth when I got the call from the club to say we had had a big win and had to pull-over. The team told me the atmosphere was amazing, all the customers burst into applause and started cheering. It’s great to have some genuinely good news in the present times.”

“We are thrilled for our lucky National Bingo Game £50,000 Jackpot BJ’s Bingo winner and hope that David and Beverly enjoy their winnings: some treats are sure to be in order and we hope their luck continues.”

BJ’s Bingo Leigh will be hosting an in-club party to celebrate the big win on Sunday evening 25th October where all players will share David’s success by receiving a gift set containing wine & chocolates.