The History and Future of Bingo

It’s safe to say that bingo is now one of the world’s most recognised and popular games. The simplicity of how to play it, alongside the ability to win cash prizes, are what make the game so appealing. Bingo has progressed from being something played in large halls, to an established product which is now easily played both worldwide and online.

Bingo has been around for much longer than many people might think. Where exactly did this game originate from? How did it grow to become what it is today? Perhaps most importantly, what exactly does the future hold for bingo?

The Origins of a Simple Game

Bingo is considered to be a direct descendant of an Italian game known as ‘Lo Giuoco del Lotto D’Italia’. This came about in the year 1530, almost 500 years ago, when Italy as a country united and the Italian National Lottery was established.

This is still held at weekly intervals in Italy to this date. It is considered invaluable to the government’s budget and Italian economy, due to the game’s yearly contribution of more than $75 Million.

Jumping ahead over 200 years, a report emerges of ‘Lotto D’Italia’ being played in France in 1778. The idea had caught the attention of the intelligentsia in the country, and in the classic version of the Lotto which was developed there, the playing card used in the game was split into three horizontal and nine vertical rows. Each of the horizontal rows had five numbered and four blank squares. The vertical row contained numbers from 1 to 10 in the first row, 11-20 in the next and so on all the way up to 90. The equipment was rounded off with chips. With numbers from 1-90 in play, each player was dealt a card before the caller would draw one of the chips from a cloth bag and call each number out individually.

After this, it began to shift towards becoming the game we know today. However, it would be amiss to tell the true story of bingo without mentioning the significant influence of a certain Polish businessman based in the US a number of years later…

Fast forward to December of 1929, and we find Edwin S. Lowe, a New York toy salesman struggling to make a living. Edwin took it upon himself to drive to a small town called Jacksonville in Georgia, going on to attend a nearby carnival. Despite the night drawing in, a booth was still open and packed to the brim with people. Inside this booth, they were playing a variation of Lotto, intriguingly called ‘Beano’.

‘Beano’ essentially followed the same idea as that played by the French Socialists. Although the gamers in the booth used beans to cover the called number on their card, once someone had filled a line on the card in any direction, they were the winner and would announce it by yelling ‘BEANO!’

Upon Edwin’s return to New York, he purchased some dried beans and a rubber number stamp to print on cardboard. Edwin invited his friends round for a gathering and saw them playing the game of Beano with the same excitement as those he witnessed at the carnival. More interestingly, during one round of the game, a female participant became so ecstatic at winning she launched out of her seat and instead of yelling ‘Beano’, she hesitated and called out ‘BINGO!’

This planted the seed into Edwin’s head, prompting him to turn it into a tangible product that he could place into the marketplace. The first editions of the game were launched in two versions, one with twelve cards for $1 and twenty-four cards for $2. The game’s success and popularity soared, becoming an instant hit and marking the official birth of the modern game we now call bingo.

Bingo made the jump from Italy to France, Germany, the UK and other parts of Europe during the 18th century. The European edition does seem to have subtle differences to the US product, although they both use the globally recognisable name of Bingo. The exact origins of the UK version of bingo are not explicitly known, and it is unclear why 90 balls are used instead of 75. However, the facts remain that the game has grown massively over the years. 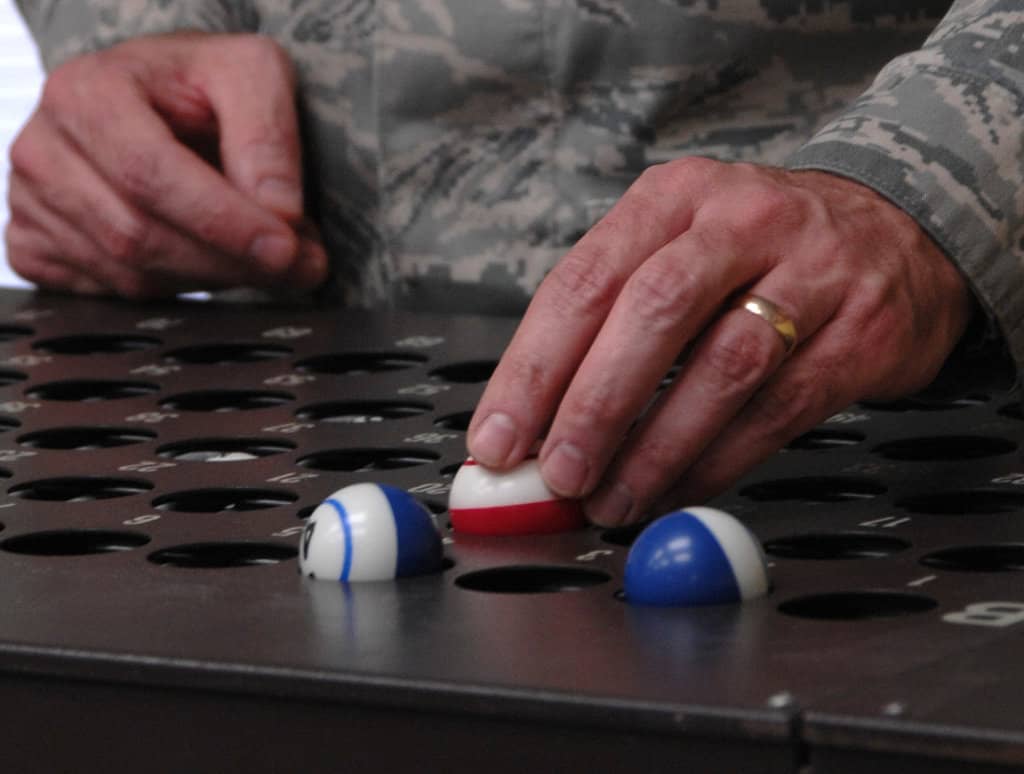 The industry currently has a fresher focus on enticing younger players into their halls, with many of them being transformed into locations that create a modern, upbeat atmosphere.

What Does the Future Hold for Bingo?

Bingo is continuously evolving, to keep up with modern times and the trends that come with it. It remains one of the country’s favourite pastimes, and for good reason. Also, the introduction of online bingo and the ability to play on a mobile device has further improved the overall image and status of the game in the 21st century. From here, the only way is up for this old favourite.

If you fancy making some bingo history of your own, pop down to one of our 3 bingo halls in Birmingham, Leigh or Reading today. Whether you’re bringing a mate or planning a party, BJ’s Bingo is the place for you.